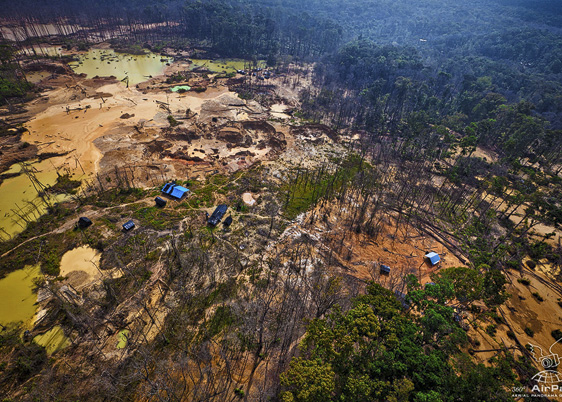 As the producers of about 20% of gold worldwide, artisanal and small-scale gold miners (ASM) consume more than 30% of all industrially used mercury. This makes them the planet’s biggest mercury polluter. Mercury contamination in ASM is caused when miners employ rudimentary amalgamation processes. Amalgamation means that the chemical binder mercury (Hg) is used to extract the gold from the ore. The mercury forms amalgams with the gold and, when heated, evaporates and leaves behind the pure gold. In ASM, amalgamation is often followed by a chemical leaching process called cyanidation.

Both these processes have severe impacts on the environment as well as on human beings. When the mercury is evaporated it enters the atmosphere and is inhaled by miners, gold shop workers and people living in nearby areas. The health consequences of short-term exposure to mercury vapour are problems with the respiratory tract, such as chest pains, cough and impairment of pulmonary function. Long-term exposure can lead to fatigue, loss of memory and depression as well as long-term neurological and renal degeneration. High levels of mercury vapours can even be fatal. Mercury may also be consumed via food, for example contaminated fish. Since mercury also settles in sediments and ecosystems, it is extremely harmful to the environment. After the leaching, miners dump the cyanide solution in local watercourses, which are then polluted with mercury and lead and lose their aquatic life.

Unfortunately, an increasing number of artisanal miners are using these dangerous processes, for example in Brazil, Ecuador, Indonesia, Mozambique, Peru and Zimbabwe. In particular, the problem of mercury contamination affects Colombia, which ranks as the world’s highest per capita mercury polluter. This is because guerrillas and paramilitary activities forced miners to process the gold in the town centres in so-called entables, which are located near residences, schools and stores. In other parts of the world, the amalgamation takes place in the fields. In Colombia, however, the gold amalgam is burned in urban areas, using no or insufficient condensers or filters. Therefore, urban mercury levels reach up to 1 million ng Hg/m3 inside gold shops and 10,000 ng Hg/m3 in residential areas. The WHO limit for public exposure is 1000 ng/m3.

To prevent further mercury contamination, the entables need to be removed from town centres and technical equipment such as filters and condensers need to be installed. The leaching process would be safer if acid was used to dissolve and recycle mercury. It is highly problematic that the price of mercury is low in Colombia and it can be imported legally. Public information and education about mercury pollution is very rare and limited. The local communities are often economically dependent on ASM and have no interest in changing the situation. However, the amalgamation process is not only dangerous to the environment and human health, but also inefficient.

For Amalena, cleaner and responsible techniques are the standard. Our miners do neither use any mercury nor other toxic chemicals in extracting the gold but make use of gravity methods. Amalena is fighting mercury contamination in Colombian mining and promoting environmental stewardship.

Gold mining has a very long tradition and unfortunately has done big damage to the environment and people. Contamination of Ecosystems with toxic waste, child labor, worker exploitation, land rights violation and displacement of communities are just some examples.

Use this form to find things you need

By continuing to use the site, you agree to the use of cookies. more information